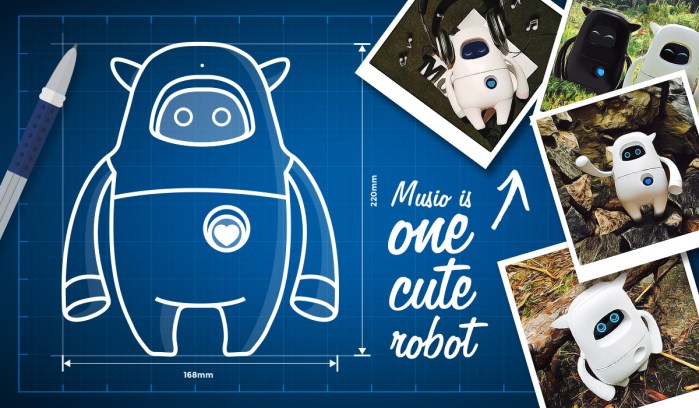 In the past years, especially this year, there is a rise in social robots coming out. What do they have in common? They tend to be quite cute! There is a reason for such cuteness including Musio. When Musio visited various conferences like “The Contagious” in London and TechCrunch, we got lots of various comments. A lot said “Musio is so cute!”, “So friendly looking” and people just wanted to hold him.

Cuteness is something thats been used for quite a while with features like big eyes, happiness and a big head. These features are based on babies. This makes the robot liked and cared for, even when knowing they are inanimate. Making robots cute tends to create a sensation of bond and earns trust. People tend to ‘forgive’ mistakes and expect less from them just like expecting things from kids. Cute robots gets us humans to do things we normally don’t do when interacting with robots like Aibo or the Furby that came out back in 1998. Google’s self-driving car is designed to be cute to make it trustworthy and kill the boundaries that people are still afraid of automated vehicles.

Evidence of all this is a Japanese robot called Paro. It’s design is based on the baby harp seal and guess what?… It’s also cute. It’s a social interactive robot that helps lift the spirits of elderly adults. Social robots will change the way we interact with technology using speech and gestures rather than just pressing a bunch of buttons in a menu or console panel.  Have you ever named your radio, fridge or your car? Well some people do and this shows that we are eager to connect to our technology.

Musio takes what these robots do one step ahead with natural conversation skills and is also very cute. Zos and his team did an amazing job designing Musio after a lot of research, testing and prototyping. Check out this post to read more about the initial ideas and Musio’s designs.