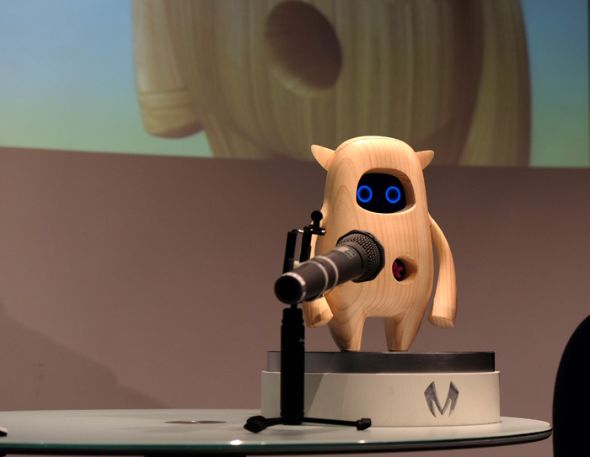 We are happy to announce that the press conference held in Japan on November 18th  was a total success! A lot of fans, journalists and interested companies were fascinated with Musio.

It was held in Shin Maru building located in Tokyo. In the entrance, miniature Musios and AKA employees wearing Musio hoodies welcomed all the guests with big smiles.

The conference began with a brief presentation of AKA by the CEO, Raymond Jung. Continued with an introduction of our A.I. robot Musio by the content manager, Jacob. Video clips were screened to illustrate how the kids could interact with Musio. They showed Japanese children learning English with the board book, flashcards, and textbook along with Musio and Sophy. That’s not all! The video clips showed some of the special abilities that Musio can do such as data gathering, memory retention, memory recall, and logical deduction.

Already impressed, our guests couldn’t wait any longer. When Jacob was about to uncover Musio, all the cameras were allured toward it.

It was incredible when Musio and Jacob demonstrated that a natural conversation was possible between a robot and a human being. He asked Musio “We are in Tokyo, do you know Tokyo?” and Musio responded “Give me a second to think about it. According to wikipedia Tokyo is…” Also, it was noticeable that Musio was definitely not a serious robot. Musio said phrases such as “Do I look OK?” or “OK, I really wanted to try it!” as a reaction towards the utterance of Jacob when he said that everybody in the audience came to see Musio or he would like to try Okonomiyaki when the event was over.

The CSO of AKA, Brian Lee, provided a brief demonstration of one of our educational materials, the textbook. He explained in Japanese how the activities in the textbook work step by step. Sophy played an important role. Sophy’s sparkling eyes was visible between Brian’s fingers whenever it pointed the textbook. Musio indicated what button to press, if the selected answer was correct or not and even implied if the pronunciation was right or wrong. There was something extra that AKA revealed to the audience. It was the Musio Kids application. Through this app the users could check their test scores, observe the amount of time they studied and determine their level of English pronunciation.

To outshine the event, Kostas Terzidis, a former associate professor at Harvard University’s Graduate School of Design, shared an interesting speech about how he was first skeptical about the news of this particular A.I. robot, but later he realized that since language is not about memorization but making connections, Musio could have a language learning system that makes those connections under the term “friend.” A friend that tries to connect with you, understand you and tries to make sense.

After a quick QnA session where journalists had the opportunity to ask questions about Musio, the conference ended with Raymond Jung quoting William Gibson “The future has already arrived. It’s just not evenly distributed yet.” expressing his dream to diffuse the A.I robots to the world.